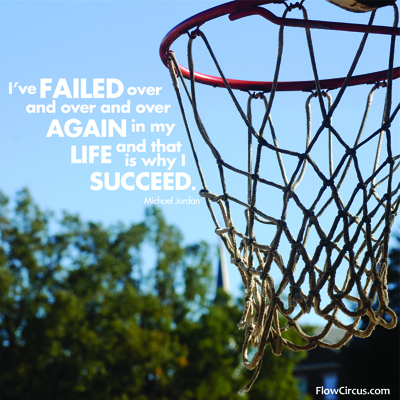 What's your latest failure that you learned from and ultimately led to success?

Even though I'm not a huge basketball fan, I grew up in the 80s so I remember Michael Jordan's rise to stardom and the year every boy wanted a pair of Air Jordan's for Christmas. What I really admire about Jordan, however,  has been his ownership of the importance of failure in the process of being successful. This quote came from a commercial a few years ago in which he says he's missed over 9000 shots and lost almost 300 games. Sure, he was getting paid big bucks by Nike for the spot, but not many superstars would be willing to admit to the  struggle that comes before the success.

I took this photo in my neighborhood which borders a small college campus. On many occasions I've walked by during lunch hour and seen the college grounds crew in the middle of a pickup game. Based on what they wear, it looks like different levels of staff are playing together. What a powerful way to practice failing and succeeding together as a team!