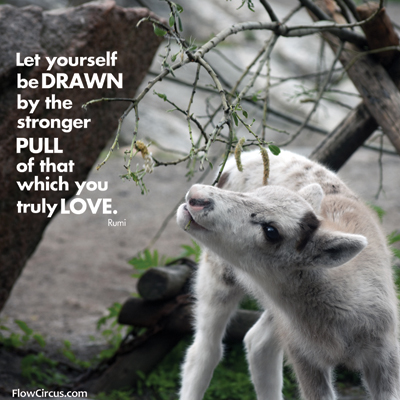 “Let yourself be drawn by the stronger pull of that which you truly love.” Rumi

Traveling in Stockholm last year, we visited an open-air museum and zoo. This little guy caught my attention. I watched as he nibbled intently sometimes contorting himself to get a few more bites totally unaware of the cavorting of his siblings or the fawning of on-lookers. I often wish I could get in that same focused zone as easily.

You would think in the time of a pandemic lock-down it would be easier. Less distractions, in theory. But in reality, we’ve been trying to adapt our business and figure out how to keep it viable so work has been busy as ever. At least that’s what I tell myself.

I blame external distractions, but the reason for not getting consumed by the pull that Rumi describes ultimately comes down to me. I haven’t created the space for it. It’s easier to stay “busy” - that’s much more my comfort zone. Accomplishing tasks, checking boxes, and getting things done feels good at the end of the day. Diving into a writing project or creating new programs to launch is multilayered, much more messy, and somewhat daunting. It can be more satisfying in the end when (and if) you get there, but the process requires more vulnerability.

Also, I overthink things. Like this post. I found three or four pages of notes that I wrote at different points over the last few months. Ideas for things I might include, but I never actually sat down to write. Overthinking and planning to do becomes a distraction that gets in the way of actually doing.

So, what can this little goat teach me? First, go for what nourishes me. Right now. When it comes to when I should nourish myself or what exactly will nourish me, I should listen to my body more than all of the overthinking in my head. The challenge here is knowing whether what my body wants is just a short term satisfaction such as kicking back on the couch and binge watching The Marvelous Mrs. Maisel. Or whether what it wants is truly going to bring me nourishment.

The Rumi quote says the stronger pull of what you “truly love.” Sure, I thought they did a great job with that tv show, but I wouldn’t classify it as “true love.” It sounds a little intimidating when people tell you to follow your “passion.” What if you don’t know what your passion is? Then it feels like a lot of pressure.

I think back to that goat after he finished eating and went to play with his siblings. Or think about puppies playing. Silly, playful, adventurous, curious, uninhibited - what makes me feel like that? Now mind you, that path might get you in trouble - a friend’s puppy just got his head stuck between slats in a fence in his unbridled pursuit of what pulled him! But I guess that can also be how we learn valuable lessons.

Another way to approach this idea of “following that stronger pull” can be found in our Flop-osophy strategy - Play with Variables. When we teach the flop ball, we emphasize that there’s no one way to work, learn, and play. For example, Howard Gardner identified that we all have different intelligences and Stuart Brown noted our different play personalities. It’s easy to get lazy and fall into one way of doing something or repeating the same activity over and over. To think there’s the “right way” or a way it “should” be done. But that might not be the best way for me to do it given my intelligence, play personality, skill level, or even how I’m feeling that day. Playing with variables is all about experimenting with different approaches and then reflecting on if it worked and how it felt. Did I feel the pull?

Since Covid began, I have done no free writing just for the fun of it. Prior to then, I might have spent 30 minutes a few times a week. Because of a combination of not feeling as playful because of pandemic concerns and the feeling that I “should” spend time on revenue generating tasks, I haven’t been doing it. I bet not having that outlet and not following that pull makes these blog posts harder to write. So that’s a variable I’m going to play with in the next few weeks - adding that time back in. When I start to wonder whether I have the time to write, I’m going to think of that baby goat!

Where is there a stronger pull that you need to follow? What variable can you play with to help you find it?