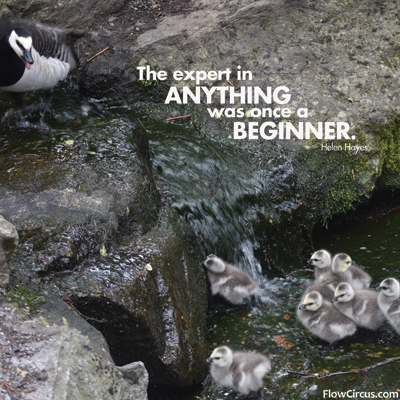 ‍Do you prefer to be the expert among beginners or the beginner among experts?

While recently strolling through a zoo, we joined a group of humans gathering to watch an amazing feat. Although the moose in the exhibit area had impressive girth and nobleness, the geese wandering through the area actually stole the show and captured our attention. The natural habitat for the moose included the multilevel waterway pictured here. Several families of geese had been enjoying the lower pool, but then the adult geese went on the move to the upper level. The baby geese wanted to follow, but didn't seem to know how.

Several of them started making attempts in various ways without success. We watched the babies make attempt after attempt jumping up on the wet rock only to slide right back down to where they started. You can see one of the adults in the upper left hand corner of the image honking to the younger ones. Maybe the honks translated to helpful coaching, but the harsh sound seemed more like an expression of frustration. At one point the moose came charging over to find out the cause of the fuss. The crowd of 20 that had gathered erupted in cheers when the first little one finally had success.

I enjoyed watching the people's reactions as much as the geese. We get to see endless displays of experts performing skills in Olympic events, professional sports, or Broadway shows, but how often do we get to watch their learning process? What did that expert have to go through to get to that level of performance? Helen Hayes, the person quoted here is one of only 15 people to win a Grammy, Oscar, Tony, and Emmy. She clearly kept stepping out of her comfort zone to learn and master new skills, but the audiences probably only saw her as the "First Lady of American Theatre" as she was known.

As I looked at the group gathered, I wondered which of the beginner geese they identified with and cheered for the most. The fearless one that went first, the little guy that hung back at first to watch the other attempts all the while watching and learning, or maybe the one that moved to the back to watch after one failed attempt. This gaggle of geese represented the wide variety of ways we can choose to face a challenge. And it is a choice. When we pay attention and remember that those experts were once beginners, it gives us permission to be messy and get curious about the next steps.

The honking of the adult geese also contained a valuable lesson. They represent something I've heard referred to as the "curse of knowledge." Once we've learned information or a skill, we forget what it was like to not know it. And if it came easy when we first learned it, it makes it even more challenging to be able to patiently teach a struggling beginner. We just can't relate to their experience. Next time you feel yourself getting frustrated when explaining something to a colleague, new employee, student, or family member, pause to check-in with yourself and the other person. What additional information or support might they need to have success?