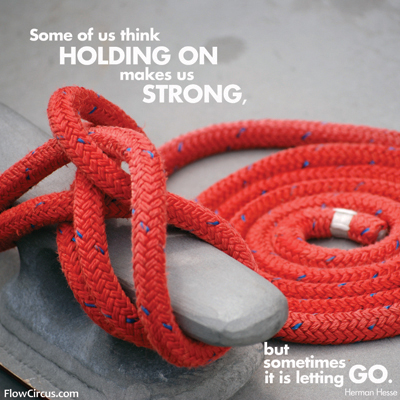 When does holding on to an idea, strategic plan, or relationship provide an anchor and when does it restrain?

The new year brings an opportunity to reflect on the past year's growth and missteps while setting goals for the upcoming one. My partner and I sat down last week to look specifically at what we will each focus on during first quarter. I went into the meeting with a clear idea, but quickly became muddled in the course of our conversation. He suggested an alternative that made sense, but I wanted to hunker down and hold on to my original focus.

To give some background, I'm a detail oriented planner. I like creating strategic plans and timelines and sticking to them. On the other hand, Paul has the creative ability to look at any situation with a fresh perspective and the agility to pivot when new opportunities or information present themselves. Our skill sets complement each other well. Until they don't.

As Paul presented a fresh perspective, I could feel myself emotionally reacting and holding on to "my" idea that fit with a plan we laid out 6 months ago even though I could intellectually see that letting go of it would be better for the business. I managed to pause before reacting (that does NOT usually happen), communicate the internal conflict I was experiencing, and get curious about the source of the resistance I felt. Practicing mindfulness in that moment allowed us to further the conversation, realize a missing piece in both of our ideas, and create an even stronger third option to move forward with as we embark on the new year.

I'm purposefully not going into the specifics here, because whether it's a member of your work team or your spouse (in my case it's one and the same), you're probably paired with someone that complements you. Your differing skill sets can create beautiful synergy as you bring out the best in each other, but the different approaches can also quickly lead to tension. Paul and I continually work on moving through that duality and quite honestly, I think it will always be a work in progress that requires mindfulness.

In my experience, tightening the ropes on my position and armoring up to defend it at all costs is the easy way out. Yes, it creates conflict, but I can feel righteous from the safety of my comfort zone. Being open, curious, and willing to shift mindset is uncomfortable and requires vulnerability. I don't know what will come up and can't control the outcome (in case you haven't noticed detail oriented planners also tend to want control).

Although messy and scary, choosing to sit in the discomfort and let go of control can free us to gain insight and grow stronger.