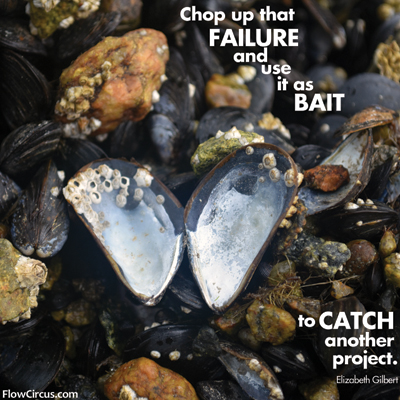 Chop up that failure and use it as bait to catch another project. Elizabeth Gilbert

As a kid, I wanted to like fishing. I had two older brothers and we had lots of ponds and creeks near our house to explore. We also went on family vacations at the beach which sometimes involved pier and deep sea fishing adventures. I loved the calm nature of hanging by the water and casting the pole, but didn’t actually like catching the fish.

The moment of hooking something that most fisherman find exciting, I found downright stressful. Usually the fish was too small so I’d watch nervously as as my brother not-so-deftly tried to unhook and throw it back. As far as chopping up failures and using it as bait, you lost me at the smell. Seriously. I used to want to go on those deep sea fishing boats with my dad and brothers every summer, but as soon as we’d get to the docks I would have to turn around and leave with my mom. Waves of nausea would hit as soon as the breeze carried the first whiffs past my nose.

I’m going to pause the story here to explain that I usually start these posts and don’t always know where I’m going to take them. I give myself room to explore and play. Sometimes that works on the first try, but often I go down a winding path (or two) to a dead end. I originally thought my attraction-repulsion to fishing that I described above might be a parallel to my relationship with creativity over the years and wrote on that for awhile. It seemed insightful at the time. Until it wasn’t.

Later that day after taking a break from writing, a phrase I first heard in a writing class came to mind - you have to be willing to kill your darlings. The practice of looking back at what you wrote and getting rid of lines, characters, dialogue, etc. if they don’t move the story or idea forward. I knew immediately that I had dumped a bunch of words onto paper. I liked a lot of them, but nothing moved. I needed to chop it up and use it as bait for something else.

I came back to the idea of failing. Failing at my first attempt at writing this, but more importantly the feeling of failing at fishing. Those stories I told above have become funny stories of family lore now, but at the time I felt real sadness at harming the small fish and disappointment when I couldn’t go on the boat with the big kids.

How can we move beyond sadness, disappointment, shame, and other negative emotions associated with failure and get to a place where we can use it as bait for other projects? How can we empower ourselves to let go when something isn’t working and make space for the next, even better thing that wants to take its place? I started with reflecting on these fishing stories, but then thought about how more recent business failures have led to more exciting projects.

Creativity requires failure. I don’t like it. I would much prefer that every time I sit down to write the words and ideas start flowing and these posts come out in one take. But they don’t. This image better captures the scattering of ideas in various states of exploration, organization, and brokenness during the process of working on a post and most other projects. I heard an interview with someone recently who referred to creativity as a muscle. You need to use it regularly if you expect it to work. I think comfort with failure might be a muscle, too. As I practice getting more comfortable using it, I find has become easier to be open to what it can teach me and to the next project it can catch for me.The open shell in the middle of the image will serve as reminder to me to keep practicing and working that muscle.