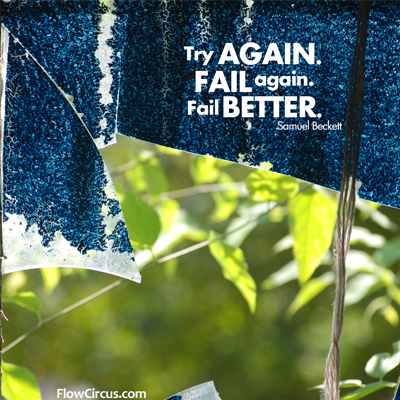 Do you have an example of something that you thought of as a "failure" that you learned from or led to new opportunities?

It took several attempts for me to create this image. I started it months ago with the following excerpt from Samuel Beckett's Worstward Ho, "Ever tried. Ever failed. No matter. Try again. Fail again. Fail better." But it didn't work because the words overpowered the image. Additionally, I liked the message of his words, but I couldn't remember where I had come across them. I'm not familiar with the work of Beckett and felt no connection to him. Next, I tried using other quotes about failure because this photo fits that theme, but struggled with both. So you could say I failed again and again for months.

When we teach juggling, we constantly tell learners to observe what's happening, make adjustments and try again. Leave the judgment and the "I stink at this" at the door. Or in Beckett's words, we teach people to "fail better." I've been working on applying this growth mindset to my creative work as well. Each time that I hit a wall with this image, I paid attention to what wasn't working for me, tried a new approach, and then sat with the results. No judgment or frustration (well, less than usual - I'm still working on that skill!)

Recently, I came back to the image with a quote by educator John Dewey whose work I admire, "The person who really thinks learns quite as much from his failures as his successes." Again, the quote was too long. Later that same day, I was at the library picking up a book and on the shelf next to my book sat, Fail, Fail Again, Fail Better: Wise Advice for Leaning into the Unknown by Pema Chodron which I had read over a year ago. Beckett's work inspired a commencement speech that Chodron gave encouraging new graduates to get comfortable with the unknown future, learn the fine art of failing, and view mistakes as the "portal to creativity, to learning something new, to have a fresh look on things." That's why I first wanted to use that quote! I loved Chodron's speech the first time I read it and the message still resonated.

I took the photo many years ago when traveling through York County, SC. We passed an old run down textile mill and decided to walk around it. Mostly hollowed out with various artifacts like spools of thread, a desk chair, ashtray, scale, toolbox, chalkboard tallying output, and old packaging lying around made it a really cool place to photograph. This broken window captured my attention and symbolized for me how the community and families must have felt when the factory closed up shop. The failure of this company may have devastated them for a time, but it also may have provided an opening or a "portal to something new."